Skip to content
How Many Golf Clubs in a Set

How Many Golf Clubs in a Set

First, let’s look at how many clubs are allowed in your bag. The United States Golf Association rules allow a golfer to carry 14 clubs in their bag.

Typically, this will consist of:

The clubs are listed in ascending order of “loft”

Loft is the angle that the club face presents to the ground. The more loft we have, the higher the ball will go and the shorter distance it will travel.

The higher lofted clubs are used as we approach the green with wedges or short irons. We need a high ball flight to get the ball to stop quickly on the green and not continue rolling through it. We also use them to play bunker shots.

So why do we need all these golf clubs?

Well primarily because different clubs are used to hit the ball different distances.

At this point, it will be useful to describe what a golf course layout looks like. 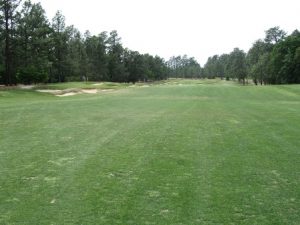 A typical golf course is 6500 yards long and comprises of 18 holes (a round of golf) to be completed. That will take somewhere around 4 hours. The 19th hole (clubhouse bar) is optional but recommended. Par is often 72 which means that if you go round in 72 shots including puts, you’ve made par.

The average club golfer will go round in 89 shots or 17 over par. He or she will have a handicap of 17.

A golf handicap is what sets golf apart from other sports. It allows two plyers of different ability to have a competitive match. Effectively, whoever plays best on the day, compared to their average play, will win.

Each “hole” runs from the tee box where we start from – designated by markers, onto a fairway, that leads to the green. The green has a small hole called the cup where we must deposit the golf ball to finish the hole.

The fairway is the mown are of grass that runs from the tee to the green. Widths vary overall and can very along their length but range from around 15 yards wide at the narrowest to 50 yards at the widest.

The green is a manicured short cut area of grass at the end of the fairway. Greens vary in size and shape but something around a 20 yard diameter gives you an idea of the size. Some greens are tiered, ie. They have more than one level and they often have slopes. The pin position can and does vary. This is to add variety and to make putting harder.

On the way to the pin, there are various hazards depending on the course terrain: 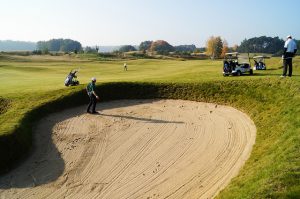 Bunkers are placed by the course designer and made or maintained by the ground staff. There are bunkers on the fairway and around the greens.

They are often roughly circular and In size, they range from around 10 feet across to the size of a small beach. Some are shallow, and some are deep.

They are called sand traps by golfers because they have a layer of sand in them around 3-6 inches deep on a compacted based.

Drainage ditches or small streams may be encountered either running along the fairway (a lateral hazard) or across it.

Larger areas of water such as ponds, lakes, streams and rivers all add to the fun.

Trees can be a hazard (but not in a formal golf sense), if you hit your ball into them. They often line a fairway.

The rough, is the area to the left or right of the fairway or green (and behind the green) which makes life tricky if you stray from the fairway. Rough can vary from semi-rough, maybe an inch deep mowed grass, to wild untended areas of vegeatation.

The weather can pose questions, particularly the wind. If the wind is behind us, we need to allow that it will carry the ball further than normal. If it’s blowing in our face, we need to allow that the ball won’t go as far as it normally would. It’s not usually that straight forward though as the wind can come from any direction. It can also blow in different directions on different holes, and change it’s direction during the course of a round.

Finally, my mate Mike is a hazard when his game isn’t going well, because he tends to throw his clubs.

How to play a typical Par 5

It will be helpful to describe the range of shots on a typical par 5 hole – say 550 yards in length.

We can’t hit the driver again as it’s not designed to hit the ball of the deck.

We could hit a six iron followed by another 6 iron and some people do that, but generally we want to get closer to the green for our approach shot. The closer we are, the more likely we are to get the ball somewhere ner the pin.

So we pull an 8 iron and land in the middle of the green 15 feet from the hole. 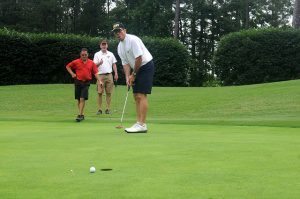 Our first putt stops 6 inches short of the hole.

We could tap it in but our playing partner says “that’s alright”.

If we duff one of our shots, either into a bunker or say 35yards short of the green, that’s when our wedges would come into play.

Golfers refer to “long” and “short” clubs because they are not all the same length. The further a club is designed to hit the ball, the longer the club shaft will be.

That’s partly because ball distance is a function of swing speed. The faster the club head is travelling at impact, the further the ball goes, hopefully in the desired direction. It makes sense then to stick a longer lever, or handle (we call them golf shafts) on the clubs when we want to hit the ball a long way.

The Driver, is the longest club and has the largest head. It’s the club that is used to launch the ball from the tee box on longer holes, usually par 4 or par 5 holes. 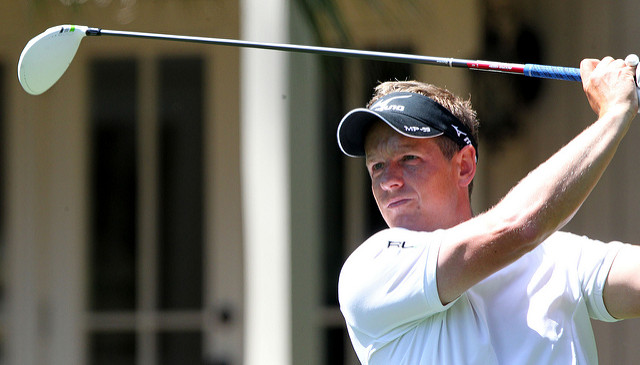 Lots of tech goes into making a driver club head with the objective of achieving distance, coupled with less dispersion for off centre hits. The loft on a driver is somewhere around 10 degrees.

Woods, used to be made out of wood, but are now made from metal.

The 3 wood is often used for the second shot on a par 5 or long par 4. It’s also commonly used off the tee, either by golfers who just prefer it over the driver or where there is trouble within driver range. Henrik Stenson, a pro golfer prefers to hit a 3 wood rather than a driver. It’s a bit more accurate, and if you can hit a 3 wood 290 yards like Henrik can, why wouldn’t you.

Some golfers also carry a 5 wood which is a smaller version of a 3 wood and therefore not designed to hit the ball as far.

Hybrids are a relatively new addition and are so called because they their design is like a cross between an iron and a wood. They are used on fairways and sometimes off the tee.

Irons, so called because the heads are made of metal. They go from a one iron, to a nine iron, with the one iron being the longest club.

The shorter clubs have more loft on them, more angle on the club face and are designed to throw the ball higher in the air.

They are built to hit the ball different distances and golfers know how far they normally hit with each one, so for example:

Choosing which club to use

Choosing which club to use in which circumstances is one of the skills of golf. Factor in that the shot may be uphill or downhill, into the wind, or with a wind behind; and you start to see why golf takes a lot of practice to be good at it.

The longer irons are more difficult to control so many golfers will start their set with a 4 iron and use hybrids or fairway woods instead of the 1,2 and 3 irons.

Nobody that I know carries a one iron, a few carry a 2 iron and a few more a 3 iron.

There’s an old golf joke attributed to Lee Trevino that goes like this:

If you find yourself on a golf course during a storm and are afraid of lightning, hold up a One Iron. Even God can’t hit a one iron.

Putters come in a variety of sizes and shapes. For the first 3 years of my golfing life, I played with a borrowed 30 year old Bronte Rustler which is about as basic as a putter gets to be. Given that it’s the most often used club in the bag, golfers will often spend hundreds of dollars on a putter.

What’s in my bag

Individual golfers will mix and match the clubs in their bag to their preference, for example, here’s what I have in my bag:

What clubs should be in my first golf club set when I buy them?

If you’re wondering what you’ll get if you buy your first set of golf clubs, it will be something like this:
Driver, 3 Wood, 5 Hybrid, 6-9 irons, pitching wedge, sand wedge and putter. 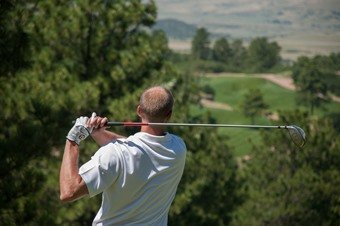 Can You Play Golf Without a Driver

Can You Play Golf Without a Driver 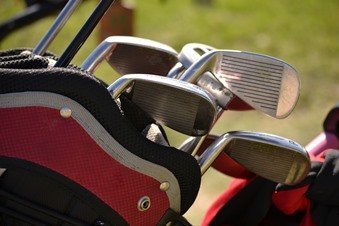 Do Golf Clubs Wear Out

Do Golf Clubs Wear Out