Which is the Best Golf GPS Watch to Buy?

If you’re looking for the best golf gps watch to buy, here’s some pointers to make sure that you pick one that is best suited to your needs.

It’s worth saying that the price of golf gps watches has on average fallen considerably over the last few years. You can pick one up for a little over a hundred bucks, and that’s great, but there’s a caveat …

These things are mass produced, that’s why the price is so low. And all low cost mass produced items have, shall we say quality control issues, a small number of them will be defective. And if you’re unlucky, it could be you that ends up with the poor one from the batch. If you do return it immediately. It won’t fix itself.

There are a handful of established manufacturers in this market with Garmin being the most established and offering the most choice. Other popular models come from Bushnell, Callaway, TomTom, and GolfBuddy.

Garmin certainly offer the most choice with around five current models and a larger number of discontinued watches. They have to be my number one brand choice and where I go for both picks.

Having thoroughly researched every watch available, I seriously cannot recommend more than these two. Digging deep into golfing forums and youtube somewhat surprisingly reveals that every other model suffers from too many issues to risk spending money on them. Issues from poor straps to connectivity, to battery life and battery charging.

The first ever GPS that I bought was  a Garmin and that was around 15 years ago. Even back then the brand had a reputation for quality and reliability so I wasn’t surprised to see Garmin on my shortlist.

I seriously wanted to find another GPS Golf watch to recommend from a different company, but whilst all other models had plenty of positive feedback, they were all dragged down by too many negative reviews.

Garmin Approach S20 – Best overall for a combination of price, functionality, and reliability. The go to brand and a popular model that’s tried and tested. It has a few little niggles that I’ll come to. But no golfer would be dissapointed to receive one of these as a gift. Click Here to check deals on Amazon.

Garmin Approach S60 – it’s hard to get away from Garmin and this is their Premium model with full colour display and touch screen. It also has slope reading which Garmin call the “playslike” feature. That measures the elevation, up or down of the green and allows you to club more accurately. If budget isn’t an issue, this is the one to choose.

Why I Picked the Garmin S20

I chose it because of a combination of low pricing, features and battery life. 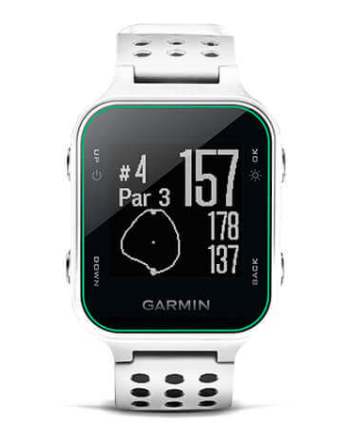 Most golf gps watches come pre-loaded with courses and the S20 has over 41,000 of them. Personally I think that’s overkill and I’d be happy to just download the courses that I’m going to play on. All that data is going to clog up the memory. The average golfer will likely not play more than a hundred golf courses in their lifetime, so letting them choose just seems a better option to me.

As with most others, there are no monthly fees for course updates etc.

Battery life is huge compared to alternative watches at around 15 hours when used as a golf watch or 8 weeks when used as a normal (it tells the time) watch. So you can get three rounds out of it without worrying about the battery, and charging is very quick compared to the three hours that some watches take.

It gives the standard front/middle/back distances to the green, which it displays as middle/back/front with middle at the top. Maybe I’m just being picky, but I’d much prefer the order to be back/middle/front with back at the top of the watch, as that’s logical and corresponds to what’s in fron of you.

Shows a view of the green (the green shape) and you can move the pin position.

It also shows distances to hazards and dog legs and gives you layup distances. The S20 shows you all hazards which is great when compared to say the Bushnell Neo which is limited to 4 hazards per hole.

It measures shot distances, which is useful feedback, but you have to remember to turn scoring on and it’s a bit fiddly to operate. Personally, I don’t use the scoring feature so that’s not an issue for me. I have to fill a card in anyway and I prefer writing the scores down. However you can’t measure shot distances without scoring turned on, and it’s a bit of a pain.

The strap is replaceable which is a great option because (and this is common across golf gps watches) they can tend to break.

Why I’d choose the Garmin G60 if Budget wasn’t Important. 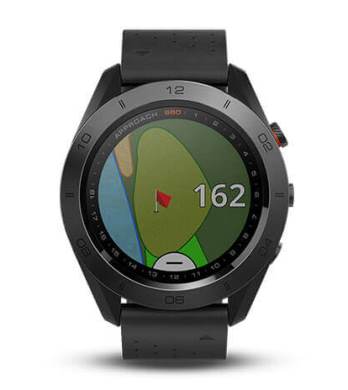 It’s touch screen, has full color course view mapping and can give you a slope reading or elevation adjustment. Those are three huge factors for liking this watch. Practically, it’s easy to use, visually, it’s appealing and yardage wise, it adjusts for slope.

Battery life is lower than the S20 though at around 10 hours in golf mode, so you’ll get a couple of rounds between recharges.

Its simply a top of the line golf watch. Be aware though that there are reports of issues with battery life and the watch not functioning properly in various ways. As previously mentioned, if the watch doesn’t funtion perfectly out of the box – refund it.

I really like the look of this watch, but honestly, I just can’t bring myself to pay 2.5 x what the S20 costs when there’s any doubts about its reliability.

But if you have the budget, this is the watch for you – Click Here to see Deals on Amazon.